Traditional Japanese Fly Fishing? Which one?
by Chris Stewart

You will occasionally, although very rarely, read about a second traditional method – dobuzuri or dobutsuri – which is fly fishing for ayu, although no one in the US ever refers to it as traditional Japanese fly fishing. Actually I don’t think I have ever seen it mentioned other than tangentially – through the flies, never the fishing.

Interestingly, the late Robert Behnke, (aka Dr. Trout) who had been a Professor of Fisheries and Wildlife Biology at Colorado State University, fished for yamame and iwana in Japan in 1951-52, and saw only dobuzuri flies and imitations of western fly patterns (Japan at that time was a major exporter of trout flies to the US). He saw no tenkara flies. Of course, that was before tenkara became tenkara and had its resurgence in popularity. Perhaps tenkara flies were rediscovered.

But the third or fourth or fifth traditional Japanese fly fishing methods? I would bet most readers have never heard of them. For example, I remember reading that tenkara anglers didn’t use weights, with the reason given that the flies were too valuable to risk getting snagged on the bottom and lost. However, we know that fly anglers in at least two regions did use weight – either applied to the fly or on the line above the fly. It might not fit the definition of tenkara, so I suppose it might be true that “tenkara” anglers didn’t use weights, but other fly anglers certainly did! 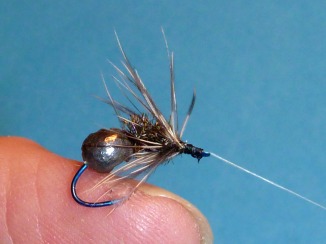 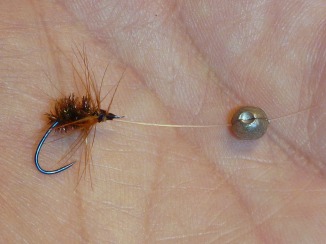 Perhaps even more surprising than a traditional Japanese fly fishing method that used weighted flies was the method that in addition to a fly (tied on the line as a dropper) used a bare treble hook a bit below the fly to possibly snag a fish that rejected the fly and turned back down or that the angler missed while attempting to set the hook. You never hear about that one! Perhaps intentionally snagging fish offends our sensibilities, but recall that ayu fishing, which is probably the pinnacle of fresh water fishing in Japan, uses live “decoy” fish and bare treble hooks to snag ayu.

A fifth method, which survives to this day, is called kebari tsuri. Tenkara, before it was called tenkara, was called kebari tsuri. It may well be that kebari tsuri was a much broader and more inclusive term – possibly encompassing any fishing with a fly. After all, the translation of kebari tsuri is “fly fishing.” The kebari tsuri of today is a method that uses multiple flies, generally either five or seven, tied as droppers on a tippet behind a wooden float. The float is cast across the stream and allowed to swing downstream. Today this is a method for catching oikawa (pale chub) and haya (Japanese dace), not trout, but a fishing method differing only with respect to where on the rig the float was placed historically was used in the Iwate prefecture to catch Yamame.

I guess the most telling piece of information, though, is that the earliest written account of tenkara fishing was in either 1877 or 1878 (two separate accounts, neither of which mention “tenkara” but both of which describe a fishing method that might have been tenkara). However, the earliest written account of fishing with a fly in Japan dates from 1678, a full two hundred years earlier! That fishing was for oikawa and haya rather than trout, so it doesn’t fall into the definition of tenkara. When considering “traditional” Japanese fly fishing, though, one really ought to give the greatest weight to the oldest recorded method – haegashira – which is fishing for chubs and dace, and later ayu, in the lowlands rather than tenkara, which is fishing for trout and char in the mountains.

Realistically, tenkara is probably much older than the written accounts of the late 1870s. Perhaps it is as old as haegashira but we will never know because there are no written records. What we do know, though, is that tenkara is not the only traditional fly fishing of Japan. So next time you string up your seiryu rod and go out to catch a few creek chubs, realize you are carrying on an old if unsung tradition.

And after you return home, fire up the computer and read (or re-read) the wealth of information on traditional Japanese fly fishing that you can find on Yoshikazu Fujioka’s wonderful website My Best Streams. It is mostly about tenkara, but if you read it carefully, you will realize there is much more to traditional Japanese fly fishing than just tenkara.

This article originally appeared in the Spring 2017 issue of Tenkara Angler magazine.

Do you have a story to tell, a photo to share, or a fly recipe that’s too good to keep secret? If you would like to contribute content to our next issue, click HERE for more details.